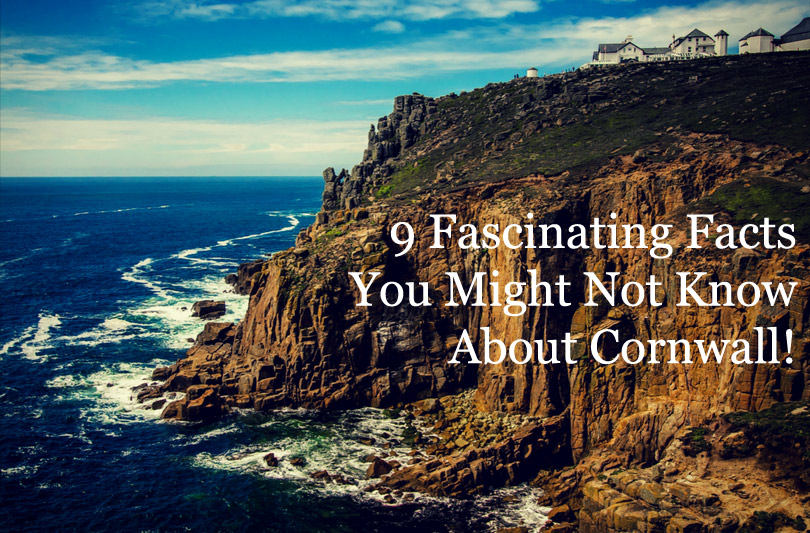 There’s a lot more to this picturesque corner of England than quaint beaches, cottages, pasties and Cornish ice cream! Here’s 9 facts you may not know about Cornwall.

Apart from a minority of die-hard separatists, the Cornish language is now largely extinct. One of the original Celtic languages; the last known Cornish speaker is thought to have died in 1777. Many natives do continue to learn it as a second language nonetheless.

2. The massive number of tourists

It’s probably not surprising that Cornwall relies a lot on tourism to support its economy. Did you know however that every year it receives 10 TIMES more tourists that its entire population? That’s roughly 5 million annual visitors compared to a mere 500,000 locals!

The Cornish coastline is the longest of any English county. 433 miles of coastline give the county its luxurious reputation. This coastline also includes Land’s End: mainland England’s most westerly point.

4. The importance of pasties

Cornish Pasties are even more important that you thought; they contribute to over £150 million of the local annual economy. They are pretty tasty to be fair.

5. King Arthur may have lived there

The Cornish village of Tintagel is speculated as being the hometown of King Arthur. The town has a historic castle which many historians think King Arthur may have lived in. Unfortunately, we weren’t too on top of census data in the 6th century, we were busy fighting wars and stuff. There’s no way to know if Arthur really lived in Tintagel Castle, but we can dream!

Well, not quite. Cornwall itself has no active prisons within its borders. Trouble-causers and criminals will find themselves locked up in nearby Dartmoor or Torquay. However, the 18th-century Bodmin Jail can be visited, and it’s even said to be haunted!

Cornwall (aka “Kernow”) is one of the original Celtic nations along with Wales, Scotland, the Isle of Man, Brittany and Galicia. It subsequently has its own tartan, which is yellowish in colour and reminiscent of Burberry.

8. The meaning of its name

The name “Cornwall” is derived from the old Cornish words “cornovii” (meaning dwellers) and “waelas” (meaning foreigners or strangers).

So there we have it! 9 things about Cornwall you may not have known. There’s a lot to learn about this historic and beautiful county.

If you are planning on visiting Cornwall for a short break then why not stay in one of our homely self catering holiday cottages?