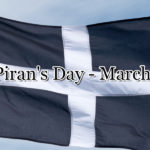 Once again, 5th March will see every Cornishman waving their black and white flags to mark St Piran’s Day, a day held in high regard in the Cornish calendar. A central figure to Cornish identity, Saint Piran is the patron saint of Cornwall, and also the patron saint of tin miners, as he is said to have discovered tin, albeit that this discovery was by chance. The Cornish flag has a black background with a white cross through the centre, and is representative of when St Piran realised that if you place a black stone into the fire, a white liquid leaked from it, this being the first discovery of tin.

The Legend of Saint Piran, Patron Saint of Cornwall

Legend writes that in the 5th century, Saint Piran was thrown into the Irish Sea with a millstone around his neck, but rather than drown, he floated across to Perranporth, Cornwall, where he built a chapel and preached to many. It is also said that he lived to be 200 years old, although there is no record of the date of his death.

The 5th March is celebrated to provide the Cornish with a national day, and many Cornish communities recognise it as the first day of Spring and take part in the celebration. In fact, it is so recognised, that the town council’s of Penzance, Camelford, Truro, St Ives, Bodmin, Hayle, Redruth, St Blazey and St Columb Major all give their staff a day off work for St Piran’s Day.

If you are looking to join them in the festivities, there are many events taking place throughout Cornish towns on Monday 5th March;

However you choose to celebrate St Piran’s Day, we hope you have a wonderful time enjoying this very special Cornish day.

If you would like to book accommodation for a short weekend break in Cornwall from March 2nd – March 5th, please call us on 01752 851133 or check availability online.